A Kind of Farewell to Ato Kwamena Onoma 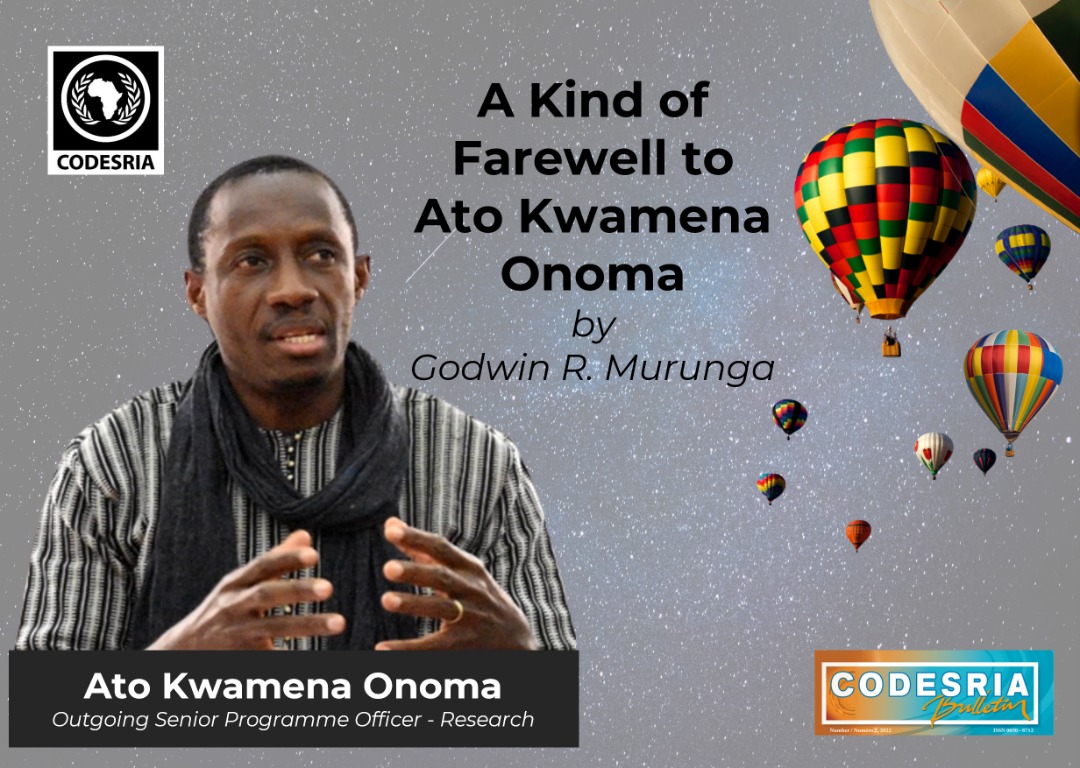 A Kind of Farewell to Ato Kwamena Onoma

Our colleague, Ato Kwamena Onoma, has served CODESRIA for a period of just under a decade, starting from November 2013 to end of May 2022. He served two full terms as Senior Programme Officer from 2016 to 2022, having previously worked with the Council as Programme Officer in the Research Programme, from 2013 to 2016. These have been nine and a half years of distinguished service to the Council, contributing immensely to revitalising the Research Programme in particular and CODESRIA in general. It is for this reason that we celebrate him in this issue of the Bulletin, even as we release it at the completion of his term, and wish him well in his transition to fresh and more challenging engagements. This therefore is ‘a kind of farewell’ to a colleague who is also a cherished friend in CODESRIA, within the community of scholarship in Africa, and beyond.

The title, ‘A Kind of Farewell’, is borrowed from Thandika Mkandawire’s last message to the CODESRIA community, published in CODESRIA Bulletin No. 2, 1996. This phrase refers to the necessity of transition, as required by the contractual limits enshrined in the Council’s regulations. However, it is also a reminder that this kind of transition does not signal an end to the relationship that we in the community, who are privileged to serve at the Secretariat, have with the Council. Indeed, as the past decades have witnessed, many who have been members of the Council’s staff never end their relationship with CODESRIA, and serve its community and individuals well after the completion of their tenure at the Secretariat. Ato exemplifies such a member. His outstanding service as the head of the Research Programme has entrenched this relationship and made him, I believe, a key pillar of reliance for CODESRIA in the past, the present and in the future.

The team worked together occasionally with the mentorship of the Senegalese philosopher, Professor Souleymane Bachir Diagne, and prioritised engagements with CODESRIA. Not only did this group, of which Ato was an active member, convene a panel at the thirtieth CODESRIA anniversary celebration, they also began to publish with CODESRIA. Earlier on, Ato had published a piece titled ‘Hybridization: its promise and lack of promise,’ in CODESRIA Bulletin, Nos. 1–2, 2004. Through this group, he later published another piece, titled ‘Exploring Intersections: The Language Question Again!’, in Africa Development, Vol. 33, No. 1, 2008. It was therefore not surprising when he was appointed Programme Officer in the Research Programme, in time. He was, after all, a ‘child                 of CODESRIA’.

In accepting an appointment at CODESRIA, Ato made a deliberate choice to join the army of CODESRIA members who express ‘a missionary attitude’ in serving the Council. He had other options, after all. He was at the time an Assistant Professor at Yale University on leave of absence. He had been the recipient of a postdoctoral research fellowship at Princeton University and of several enviable awards. Indeed, his 2009 book, The Politics of Property Rights Institutions in Africa, published by Cambridge University Press, was an award winner, and his second book, by the same publisher, titled Anti-Refugee Violence and African Politics was due for release in 2013. In deciding to relocate to Dakar to work for CODESRIA, Ato was clearly choosing to make a manifest statement of his convictions to serve the continent through directly investing in the intellectual community that is the Council.

At CODESRIA, Ato has overseen specific programmes with commitment and conviction. Too many times, one meets employees who join organisations with the objective of benefiting personally, seeking to use positions of community responsibility to construct networks that serve them as individuals. Ato has been of benefit to CODESRIA and has used his skills to serve the community. This is clear in his performance; he has accomplished his tasks with the attention and seriousness they deserved. The minutes of the Executive Committee meetings and Council annual reports bear witness to his dedication and attention to detail.

The years 2015 to 2016 are particularly key in this narrative. These are the years in which the Executive Committee of CODESRIA undertook a process of internal reforms. Ato drafted a number of key documents for the Council and supported the process throughout. It fell upon him, for instance, to elaborate a new framework for mobilising research in the community. This led to the Meaning-Making Research Initiative (MRI). During the period 2017 to 2021, the Council underwent three major evaluations and eleven audits, some of which were particularly intrusive and trying, albeit ultimately vindicated in the final reports. The process was difficult, generating a sense of siege among staff in the Secretariat. But throughout this experience, Ato remained the voice of poise and reason, and assisted greatly in steering the Council through this demanding time.

During his term of service at CODESRIA, Ato has therefore been a reliable pillar for the leadership of the Council, contributing immensely to discussions in the management team. Other than helping define the MRI as a new vehicle for mobilising research at CODESRIA, he oversaw its implementation, from 2017 to 2021. The 2021 evaluation of the Strategic Cycle confirmed that the Council had made significant steps in rethinking the research vehicles and the implementation was successful. Further, Ato has been an advocate for breaking down the silos that used to characterise the relationship between programmes at CODESRIA and instituted new ways for CODESRIA’s Research Programme to work with other programmes for the collective good of the Council. In the process, he helped to revitalise a system of engaging the community of scholarship which ensured that the MRI was successfully implemented.

Ato leaves CODESRIA to take up a professorial appointment at a university with an established tradition of engagement with Africa, and which has within its faculty colleagues whose interest in the study of Africa is very well established. In a way, he is leaving the CODESRIA Secretariat to rejoin the main CODESRIA community, this time as part of a cohort of CODESRIA members whose commitment to the Council is proven and never-ending. This is a welcome transition, which the Secretariat will take full advantage of in building new partnerships. It is thus that it is only a ‘kind of farewell’ that we are extending to him.

Many in the community will miss the camaraderie that Ato brought to his identity as a member of staff in the CODESRIA Secretariat. For us in the Secretariat, we will miss a reliable friend and colleague, one whose poise instilled a sense of stability in the Council, whose critical engagement allowed us to reflect about what he put on the table, be it in support of our thoughts or to debate them, and whose ‘missionary attitude’ demonstrated his willingness to serve CODESRIA and its membership, even in moments of great difficulty.

Ato Kwamena Onoma, we truly thank you, and wish you all our very best.