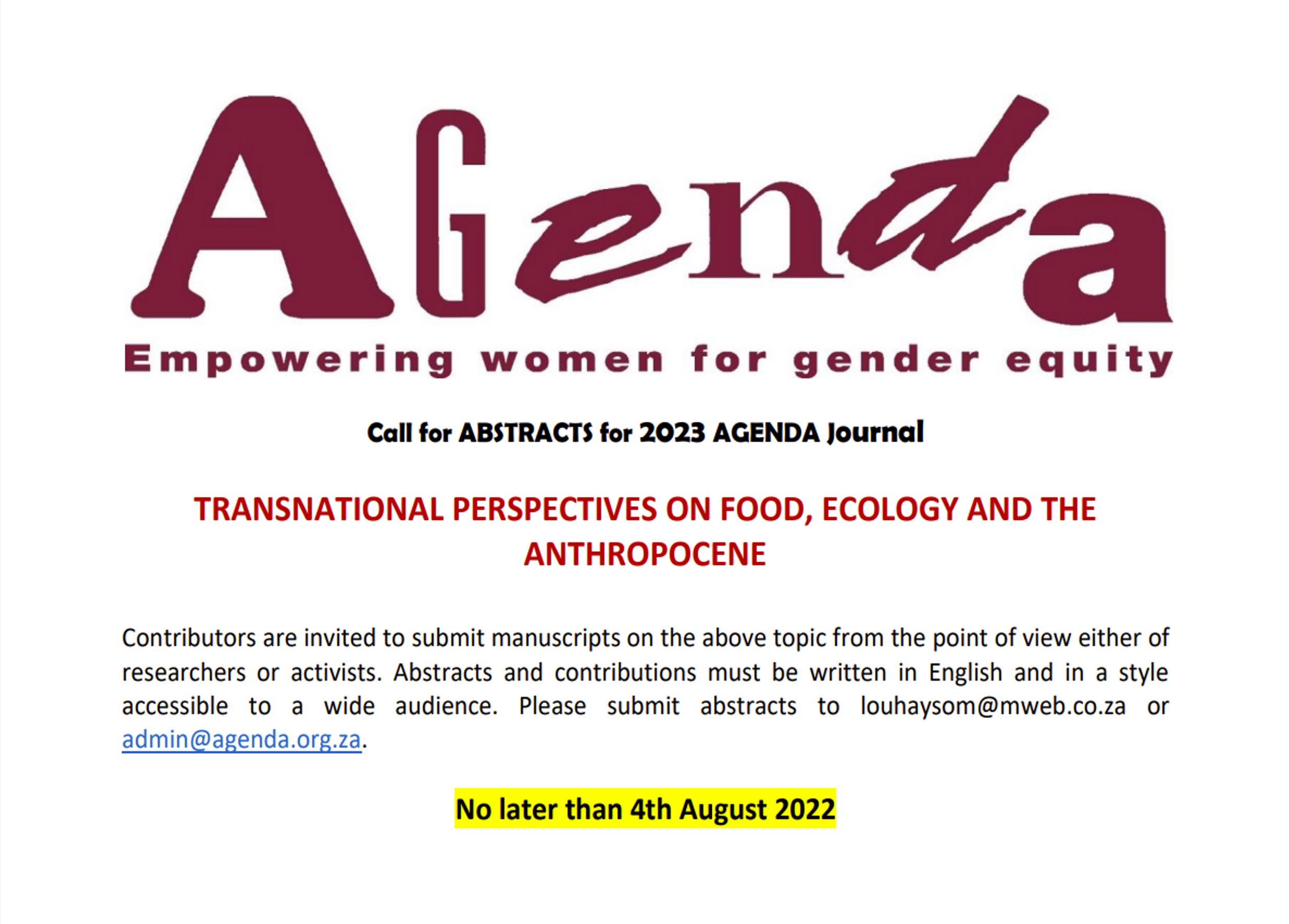 TRANSNATIONAL PERSPECTIVES ON FOOD, ECOLOGY AND THE ANTHROPOCENE
Contributors are invited to submit manuscripts on the above topic from the point of view either of researchers or activists. Abstracts and contributions must be written in English and in a style accessible to a wide audience. Please submit abstracts to louhaysom@mweb.co.za or admin@agenda.org.za.
No later than 4th August 2022
ABOUT AGENDA
Agenda has been at the forefront of feminist publishing in South Africa for the past 35 years and raises debate around women’s rights and gender issues. The journal is designed to promote critical thinking and debate and aims to strengthen the capacity of both men and women to challenge gender discrimination and injustice. The Agenda journal is an IBSS/SAPSE accredited and peer reviewed journal.
GUEST EDITORS:
Desiree Lewis
University of the Western Cape
Vasu Reddy
University of Pretoria
&
LynnMafofo
University of the Western Cape
Conceptual Rationale:
While food is at the core of what it means to be human because we need it to sustain ourselves, it is not just the case that ‘we are what we eat’ because our lives and cultures are structured around food in multifaceted ways that prompt deeper questions, more especially also post-COVID (see for example, Castellanos et al. 2022; Schenker 2020). Far from simply being a fact relevant to diet, nutrition and calories it is also a sociocultural product (Counihan 1999) and highly gendered (Counihan 1999; Inness 2001; Lewis 2015; Meyers 2001; Theophano 2003). More so, food complicates foodways as a network of activities and systems in the production and consumption of food (see, for example, Lawrance & De la Peña 2012; Riley & Paugh 2019; Sutton & Hernandez 2007). In several ways, food directs us beyond its viscerality and biomaterially (Boxenbaum et al.

2018; Moser et al. 2021) to its circulation as a set of social practices. These ideas point us to thinking about food in far more engaged and reflexive ways that urge attention about the various transformations in the social life of food (from farm to fork for instance) which is crucial to the understanding of how we interpret the production and consumption as meaningful sets of activities.
To build on this idea, the political dimensions of food have been highlighted in several ways: as an element in defining and distinguishing collective identities (DeSoucey 2016; Poulain 2017); being subject to the exercise of (state) power in relation to its distribution and withholding (see De Waal 2018, in relation to famine as an instrument in warfare); as corporatized and Mcdonaldised in global contexts (Ritzer1993); as food organising and resistance to crisis and hunger (Raj 2008; Shattuck, Holt-Giménez & Patel 2009); the hijacking of the global food supply chain (Shiva 2016), but also increasingly in relation to food waste (noting that much of what is produced is never consumed, see for example, Stuart 2009).
For decades, peripheral conversations – both in activism and in scholarship – have focused on looming ecocide, increasingly brutal industrial agriculture and farm fishing, mountain blasting and tree clearing for the sake of building malls, and enormous homes. At the same time, the arrogance of certain privileged human groups (actually a minority of the world’s population) believes that it is entitled to dominate other humans, as well as non-human species and the earth. The responsibility of certain groups for anthropocentric worldviews and actions is what has led many to question the usefulness of the term Anthropocene (erroneously conveying human beings’ collective destruction of the earth and a kind of geological inevitability in the evolutionary process), and to favour terms such as capitalocene. Crutzen and Stoermer’s (2000) naming of the ‘Anthropocene’ has provoked lively debate across the physical and social sciences. The term has also triggered deeper thinking for environmental politics, compelling recognition of the socio-historical causes of massively scaled environmental change (Dalby 2007; Steffen et al. 2011). As a concept, the ’anthropocene’ is a rough place-holder with a bloated emphasis on the ‘anthro’ that has often minimised more critical debates (recognising the location of gender as one, broader environmental uncertainties another) and food in the broader arguments yet to be explored. The Anthropocene debate has only recently reached the social sciences and humanities (see for example, Chernilo 2017) and compel us to consider other trajectories of power that intersect with it, namely the capitalocene (in its manifestation as global capital and broader circuits of power). The issue here is not simply the choices of either the ‘anthropocene’ or the ‘capitalocene’ (as Moore 2016, suggests) but rather the social and political alliances that also shape the relations between ‘society’ and ‘nature’ that compel us to place the emphasis on history, theory building, politics and ecology, indeed economy and culture.
Today, interventions that were peripheral have given way to a flood of organisations, regular columns in newspapers, teaching and organising among schoolchildren, academic publications and books. Since feminist philosophy has long been central to critiques of environmental destruction and masculinist-colonial land exploitation and farming, it is not surprising that feminist tools, concepts and methods provide powerful critiques of our current food systems, ecological collapse and the Anthropocene (see for example, Buckingham 2000; Maathai 2009; Seager 1993; Warren 1997). This issue of Agenda broadens, shifts and enhances existing work by bringing a Southern and black feminist lens to bear on what can only be seen as global developments. The special issue inspires a deeper and richer interdisciplinary exploration of the intersection of the meanings, presence and agency of food in contemporary contexts.
We invite papers that utilise a gendered and feminist analysis to address transnational perspectives on food, ecology and the Anthropocene by investigating some of the following themes:

Writers need to • Write in an accessible and understandable style; • Inform, educate or raise debate; • Provide analysis and an argument; • Ensure the introduction encapsulates the contents of the piece and that it attracts the reader’s attention by either making a controversial statement, providing a thought-provoking or new insight into the subject; • Utilize a Black feminist lens. We publish articles in various formats, which range from 6,000 words for more theorized articles, which form the main reference pieces in an issue, to shorter pieces with a minimum of 1,500 words.
Formats of Contributions
▪ Article (6 000 words max) should be based on new research and contain analysis and argument.
▪ Briefing is an adaptable format for writers to write on a wide range of subjects (2 500 – 4 000 words)
▪ Focus examines an aspect of a chosen theme in detail (4 500 words max)
▪ Profile looks in detail at an organisation, project or legislation, or a person (2 500 – 3 500 words)
▪ Report-back covers reports on meetings, conferences workshops etc
▪ (1 500 – 4 000 words)
▪ Review typically reviews books or films (1 500 – 3 000 words)
▪ Interview can record a conversation among a group of people or a one-on-one interview in which the writer asks the interviewee/s questions on a subject (1 500 – 3 000 words)
▪ Open Forum is a vehicle for debate and argument, or pieces which deal with argument and difference of opinion on a subject/issue (2 500 – 4 000 words)
▪ Perspective is an adaptable format in which writers are able to use a more personal reflective, narrative style (1 500 – 3 000 words)
▪ Poetry
Contributions should be submitted in the following format:
File type: Microsoft Word
Font: Arial
Size: 10 pt
Line spacing: single
Justification: left
Referencing: Harvard style
All submissions should have the following:
Abstract: 200 – 300 words
Keywords: approx 5 keywords
Bio: 100 – word author biography, including email address
Bio picture: head-and-shoulders photo in 300 dpi jpeg format
Contributors are encouraged to provide photos and/or graphics to illustrate their submission
Selection and Editing Process

All submissions are peer reviewed. Articles, briefing and focus pieces go through a double blind peer review process, while all other contributions are reviewed by at least one member of Agenda’s Editorial Advisory Group.
Reviewers comment on the suitability of a text for publication in the Agenda journal, as well as provide comments to help develop the piece further for publication if required. Contributors will be asked to rework the paper accordingly.
On resubmission, the piece will be assessed by the Agenda editor and a final decision made regarding its publication in the journal.
Please note that Agenda reserves the right to edit contributions with regard to length and accessibility or reject contributions that are not suitable or of poor standard.
Agenda also invites the submission of poems on the topic of women’s rights and gender.
Please note, as per Agenda’s policy, writers who have published in the journal within the last two years WILL NOT BE ALLOWED to publish – to allow new writers to publish in Agenda.
Agenda Feminist Media Sec. 21 Company
REG. No. 2000/000870/08 – NPO : 011-258 : VAT No : 4930131109
No. 71 – Road 749, Risecliff, Chatsworth, 4092 / Postal: P O Box 61163, Bishopsgate, 4008
Telephone: +27 (0)834275737: Website: www.agenda.org.za
Board Members: Lee Stone (Chair), Dr. Barbara Boswell, Prof. Grace A Musila, Dr. Gabisile Mkhize,
Prof. Sibusiso Moyo, Asha Moodley (EAC), Prof. Relebohile Moletsane (EAC)