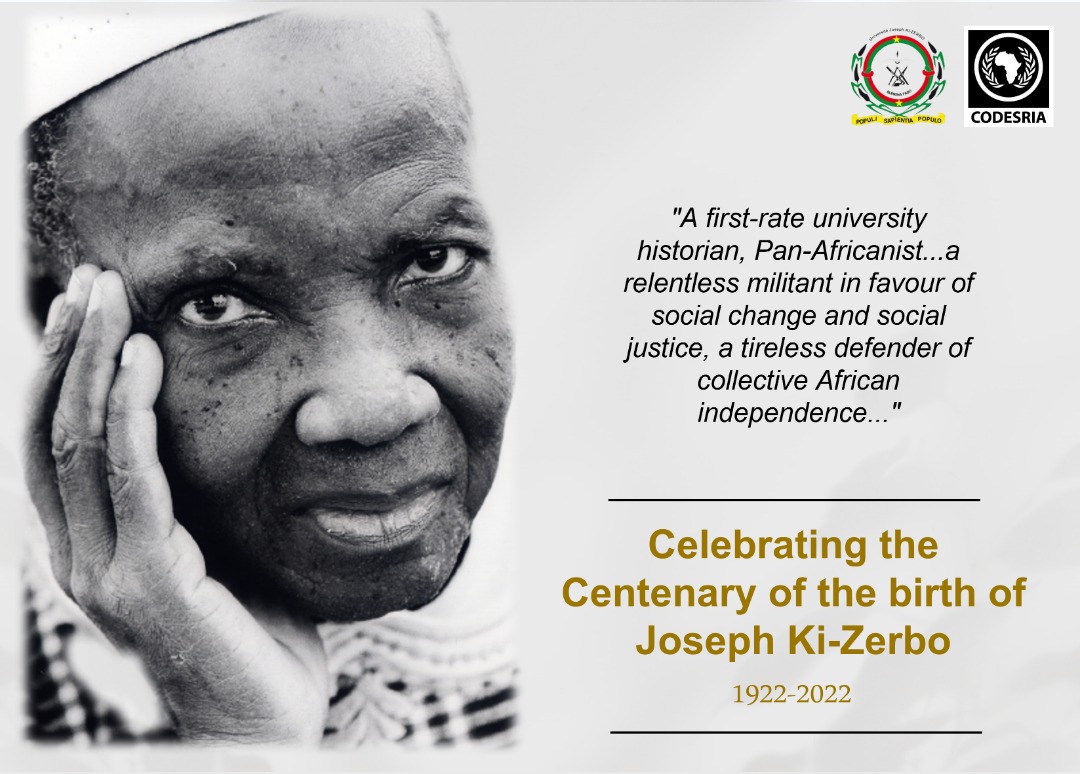 Joseph Ki-Zerbo would have been 100 years old this 21 June 2022. We thank the Federal University of Rio de Janeiro and the University of Abomey Calavi for having dedicated a colloquium to him.

On the occasion of Joseph Ki-Zerbo’s centenary, we would like to pay tribute to the figures and dynamics that are part of the same heritage. We would like to salute the Historians who have contributed to the general history of Africa and the pan-Africanist intellectuals who passed away in recent years.

We particularly salute the memory of the historians Djibril Tamsir Niane, André Salifou and the anthropologist Olabiyi Yaï, who died recently.

We also applaud the return of Lumumba’s relics to the Democratic Republic of Congo, while demanding the historical truth, without which peaceful relations between African and European peoples, beyond the colonial trauma, will remain impossible. The circumstances of the hero’s assassination are partially known and the responsibilities must be established. “One day Africa will write its own history”, this statement by Lumumba remains relevant.

We salute the young migrants in search of dignity, the action of the African Diasporas, in search of an authentic citizen inclusion, and in particular the democratic alternation in Colombia, marked by the election of Francia Marquez as Vice-President, an Afro-Colombian environmental activist and feminist.

We salute all the activists for justice and human rights.

We salute the Afro-Brazilian people and their allies. Through the Colloquium organised from 21 to 23 June at the Federal University of Rio de Janeiro, the doctoral thesis of Mrs Mariana Gino, Secretary General of CIJKAD-NLAS on the theme “Joseph Ki-Zerbo: between Catholic faith and anti-colonialist militancy”, and the series of lectures by Lazare Ki-Zerbo, Vice-President of the Centre, he has revived the links established long ago with the historian.

We also salute the martyred peoples of the Sahel, who are facing murderous violence. By deciding to savagely destroy Libya and its leader, Muammar Gaddafi, in 2011, Western leaders, through NATO, violated with impunity the sovereignty of this state, and thus the United Nations Charter, and humiliated the African Union and the African peoples.

Mali first, then Burkina Faso, are suffering heavily from the consequences of this strategy of terror.

Today, the price is paid and it is well known: it is the collapse of states weakened by the neo-liberal stranglehold, with hundreds of thousands of deaths and millions of displaced people in the Sahel as a result.

All this sad news of violence in Africa would have directly appealed to Professor Joseph Ki-Zerbo and the pioneers of his generation. They did not necessarily advocate violence but responsibility.

In this regard, the Joseph Ki-Zerbo International Centre will propose to the scientific community to revisit the 1974 text entitled ‘The Army and Our Future’, as it echoes the aspirations of the progressive intellectuals of CODESRIA, 50 years ago, well formulated by Cabral, and characterised by the analysis of the relationship between the armed force, the people and culture within the framework of a process of national liberation, the only basis of sovereignty.

We must arm ourselves with both the weapon of memory and creative invention, of theory (Cabral), so that the guns serve the cause of liberation and not of enslavement.

Education, social justice, federalism, the protection of nature, the fight against global warming are part of this Kizerbian theory of national liberation.

The birth Centenary of Joseph Ki-Zerbo will be celebrated through several activities that will take place from June 2021 to June 2023, including a symposium co-organised with CODESRIA. To celebrate his life, and therefore the struggles for Life are still in progress. For, Joseph Ki-Zerbo’s work is oriented towards the right to life, and to good life.

As the Charter of Kurukan Fuga and the maxim of Barthélémy Boganda’s country, the Central African Republic, proclaim, “Every life is worth a life, a human being is a human being”: Zo kwe Zo in Sango Language.